Alessandra Williams, PhD, is a dancer and scholar who is assistant professor of dance at Rutgers University-New Brunswick and whose academic interests include dance and performance, Asian and African American culture, transnational feminism, and queer sexuality. From 2018-2019, Williams served as Inclusive Excellence Fellow in Women’s and Gender Studies and Theatre and Dance at University of Wisconsin-Whitewater. As Eugene V. Cota-Robles Fellow, Williams earned a Ph.D. and M.A. in Culture and Performance at UCLA and through the Mellon Mays Undergraduate Fellowship, finished the B.A. with honors in American Studies and Dance at Macalester College.  Originally from Minneapolis, Williams’ work as a community organizer led to receiving the 2010 Minnesota Grassroots Solutions Organizer of the Year Award. 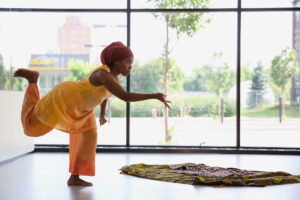 Having joined the Minneapolis-based Ananya Dance Theatre to be immersed in the company’s Yorchhā technique in 2006, Williams has performed in Dastak (2021), Sutrajāl (2019), Shaatranga (2018), Shyamali (2017), Horidraa (2016), Roktim (2015), Moreechika (2012), Ashesh Barsha (2009), and Pipaashaa (2007). Alongside Ananya Chatterjea and Hui Wilcox, Williams is co-editor of their anthology Dancing Transnational Feminisms: Ananya Dance Theatre and the Art of Social Justice.

In other publications, Williams has a solo-authored book project on the relationship between race, gender, and queer lives in the choreography of David Roussève/REALITY dance company. Her writings can also be found in TDR (“A Radical Practice of Inclusion” 2022)